While I'm in Melbourne for linux.conf.au (which finished yesterday), I thought I'd head down to the Crown Poker Room to get some action.

Unfortunately I missed the Aussie Millions by a couple of weeks, but I did run into one of the final tablist while there. He made alot of money.

I was dealt [Kd] exposed, next card was [Ac] and my redealt card was [6s]. I elected to fold and out flopped [Kh][Kc][3d] - I was not happy! I definitely would have been in with [Kd][As] and my trips would have more than likely got me a healthy stack. D'oh.

I didn't do too well in the Sit'n'Go either.. busted out in 6th place calling all-in with my [As][10s] against my offenders [Ah][Ac]. The aces held up.

Then I nearly left.. but decided to head back to the $2/$3 NLHE cash game again for $100. Only about 30 minutes in I was up to $306. At this point although I felt guilty leaving the table a couple hands after winning an $80 or so pot; but I knew it was starting to go to my head and I'd loste up and likely lose it all and probably more back. So I left, $210 up for the day.

Not a bad effort! Tournaments bad.. cash games good.. probably a bit lucky but the tables were quite soft, very often folding to reraises or calling down with bugger all.

So having taken my MacBook to the apple store on Tuesday, they replaced the logic board and subsequently found out that not only was the logic board toast, so is the hard drive.

How the hell did I manage that?

So anyway, being 10AM Tuesday morning, and a talk to give at 1:30PM - I cruised down to Myer (by way of a $6 taxi, didn't realise how close it was) and bought an Asus EeePC.

I then rewrote the talk in <2 hours and did it. It was a bit of a rush job but it worked OK.

I'm fairly impressed by the EeePC.. it's got 4G flash, 512MB ram, Webcam.. and comes with a pre-installed and customized Xandros-based OS. It has all the good utils.. Pidgin, Firefox, Skype, Openoffice, etc... although I hope to install Ubuntu on it later.

It did manage to compile a kernel in <hour earlier.. so its not *that* slow.. altho the kernel was a little minimalistic with the features needed for it.

I've really hit a wall with my MacBook.

it has stopped booting after a kernel panic, which was caused by unplugging a Sony Ericsson phone that was just charging.

I can't even boot a cd or into firewire target mode.

This is the 3rd trip now I have had something go wrong with it, dammit. I think life is telling me to go back to a PC and ubuntu!

I guess its
kindof poetic my MacBook running macosx broke at Linux.conf.au.

Posted from my iPod touch.

Well, I made it through my first day in Melbourne for linux.conf.au 2008

Due to horrible travel planning, I arrived in Melbourne at 6am but was unable to check-in to Trinity College until 1PM. Thus I had to wast a couple hours then met some of the organisers and helped shuffle boxes of conference bags out of one room, into cars to then be unpacked down at the venue.

Following that I spent some time folding up t-shirts and finally I was able to register and check in at the college.

Having taken the midnight flight over, I hadn't slept and so I carked it from 4PM to 8PM. This is going to really throw my sleeping out! But oh well..

Following on from my lazing, I located the Trinity common area, with semi-working wireless (some rogue client is handing out DHCP leases that are useless, so you have to refresh 30 times)

So far I have ran into lots of people I know from work and past LCAs.. I'll certainly miss some but they include.. Stuart Young, Stuart Smith, Colin Charles, Giuseppe Maxia, James Iseppi, Arjen Lentz, Joel Stanley, Leon Brooks, Donna Benjamin, Daniel Stone, Grant Diffey, Michael Kedzierski(sp?), Ryan Verner, Tim Ansell.. there are a few people who escape me at the moment!

As wireless is only available in the common area, my 2GB of 3G data with three is certainly proving helpful :)

Until tomorrow... (or well, today)

Heading off shortly to Linux.conf.au 2008 in Melbourne, Victoria.

I've got the red-eye, so I'll be landing in at 6AM Melbourne time - for any other LCAers i'll be staying at the Trinity college.

I'm giving a talk at the MySQL Mini-conf @ 1:30PM on Tuesday - it will be about my experiences as a MySQL Support Engineer and the common sorts of problems that people run into and how to avoid them!

Should be a good week for the conference, and maybe I can lose^H^H^H^Hwin a few dollars at the Crown with my handy dandy poker skills :)

Anyone up for a game? Unfortunately I've misplaced my small, portable and travel-friendly chipset - I really must find that.

Thanks to work, I spent this week in Cupertino, CA. Having never been anywhere in the USA before, it was somewhat exciting to be staying literally up the road from the Apple Campus.

I was also able to goto Google in Mountain View, to attend the Silicon Valley MySQL Users Group at the Visitors Center. Unfortunately I didn't come accross any large google logos to take my photo with, but I did find building number 42

I also spotted the offices of Symantec, Trend Micro, Packeteer, Solid, Microsoft, Borland and MySQL (Surprise!) along the way. Certainly "exciting" for someone thats never been to the bay area.

I had hoped to make it up to San Francisco, and do a little site-seeing of the Golden Gate Bridge and some other stuff, but was too tired to do it this afternoon, and I am attending BarCampBlock today in Palo Alto from early until I fly out tonight - so unfortunately I am going to miss out this trip. Hopefully work will send me back this way again sometime next year.

So, thanks to GUADEC 2007 kindly accepting my talk & paying for my travel expenses, and I had a good time.

I think my Avahi talk went well... we had a good 15+ minute talk about future possibilities, which is what I was hoping.
Lennart's Pulseaudio talk was also very good, it has advanced quite some since his talk @ LCA so it's good to see progress.

I got to meet Sjoerd, and generally the entire Collabora team which was pretty cool - I've fixed some bugs in Avahi so they can progress with the Salut support for OLPC which is good.

I have uploaded my photo collection to flickr, so you can check them out here.

Heres some of my favourites..

I managed to crash the in-flight entertainment system, apparently it uses svgalib.. 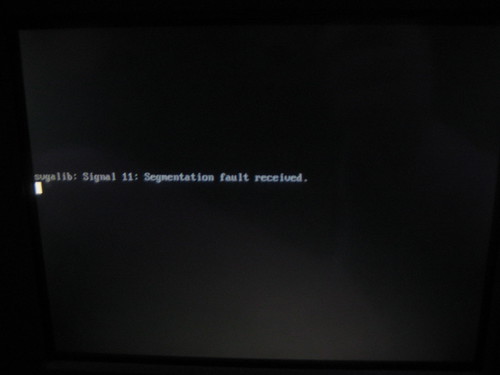 I love these power transformers that point out all sides, as much as I'm sure they are safe, it just irk's me slightly ;) 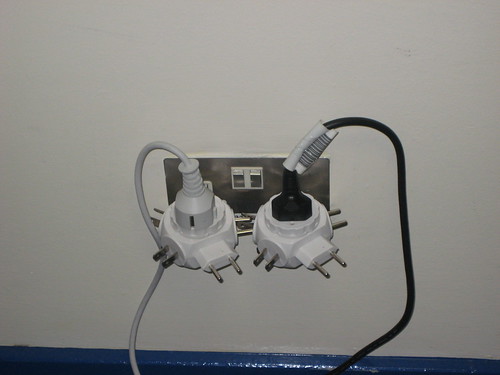 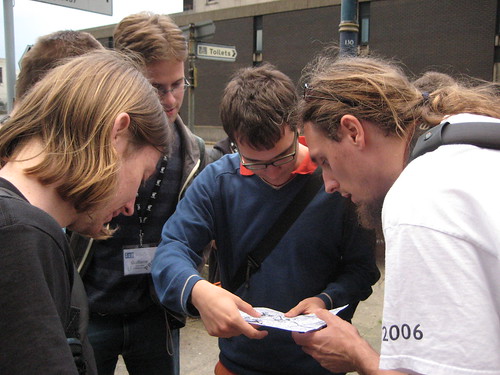 Walkabout - the Australian Bar - Dude in a kangaroo suit 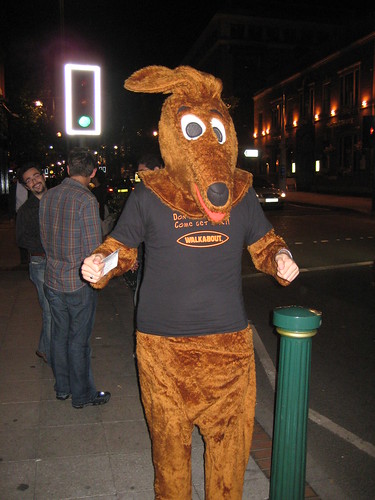 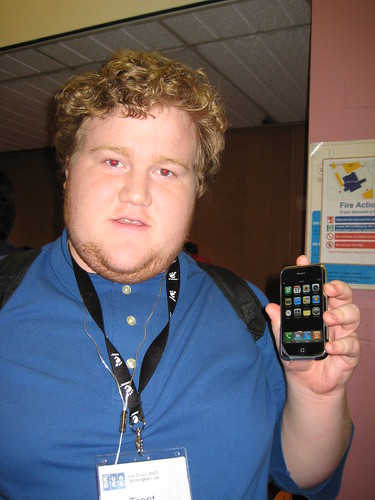 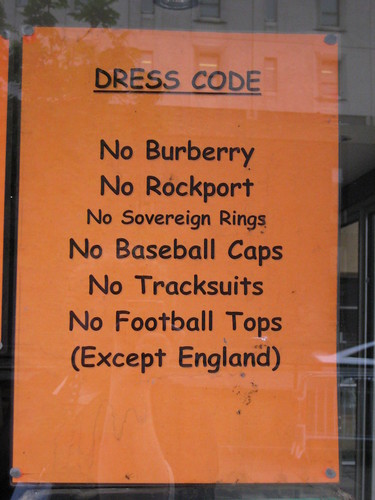 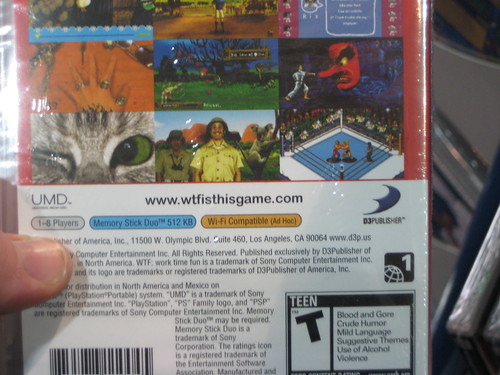 Just over 18 months ago, I started working at HostAway, initially starting out doing some casual 2-week phone support they needed at the time, my role became permanent and I quickly expanded into both Network & Systems Administration (while still doing a lot of day to day customer support, small organizations tend to demand wider skill ranges :)

None the less I felt, for various reasons, it was time to move on.  As such, I have just completed my first week working MySQL AB as a Support Engineer.

The job is home based, and I am currently working the hours of 5AM-1PM local time.  Now you may think "wow, you're crazy" for working those hours, but I have discovered that so far I am actually quite enjoying it, I feel I am getting a lot more out of my day at the moment because I seem more awake longer, getting up earlier in the day (Usually about 4:30AM).

I do have the option to start working at 7AM on most days, and given I have no travel time this doesn't put me very far behind a "normal" job as far as messing up the daily schedule.

Being a free software 'person', working for a company with heavy involvement in the free software world is pretty exciting for me.  I guess time will tell how it goes, but if this week is anything to go by I think I should be happy in the long term.

In other news, I have discovered that listening to Weird Al Yankovic continually is horrible for your sanity, mostly because he picks alot of very catchy songs to parody, which proceed to persistently circle around inside my head for the next week...

So yesterday I came home to this bird, in my carport

From some googling I *think* it is a pigeon, maybe a dove, but I didnt' check very hard, so I'm far from even moderately sure :)  The tag on it's foot says "AUST 2006" and some other stuff I couldn't make out.

It was there all yesterday afternoon, I managed to get quite close to take the above photo, but it did flinch when I tried to get any closer.

I do wonder why it likes my carport so much, It doesn't *seem* hurt, and it managed to get up here

So I assume that it can fly somewhat, I guess I'll wait and see if it's there tomorrow... If anyone knows anything feel free to leave a comment :)

I turned on the sprinklers and it was right at the very edge of the big double door out to the world drinking the water splashing in, so it's not stuck in or anything.

[for the freedom lovers out there, this it totally and completely unrelated to anything freedom :)]

how the hell did I just lose the following poker hand

I pull pocket sixes, and then flop Ace-6-Ace, i.e. 6's full of Ace's full house, after some serious betting and deceiving I go all in.

Note the completely evil look on his face! A conspiracy I tell you...

This after a long string of really stupid pair and occasionally two-pair wins, sheesh!
Collapse